Bike-share in Rome and Florence, Italy 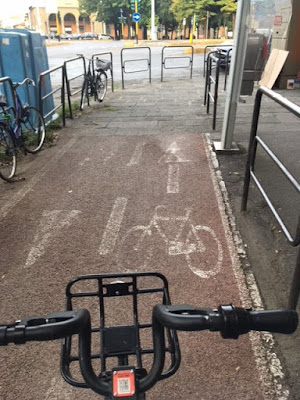 I am currently on holiday in Italy and have been interested to see the bike-share systems here in full force.
Rome has the OBike system - which would appear to be a massive failure. I never saw anyone on the bikes - but did see lots of wrecked bikes scattered around. In fact, I don't think I saw one bike that was not wrecked.

Florence on the other hand has the MoBike system, and it is doing very well. You see people using the bikes everywhere - from tourists to local commuters.
One of the factors supporting MoBike in Florence would be their network of separated cycle ways and a tight grid of low traffic streets. The network is very flawed in places (changing sides of the road without warning, abruptly ending, being full of pedestrians) but provides reasonable access. Central Rome does not appear to have this.
Posted by Athol Moore at Wednesday, August 15, 2018