The Times in London has launched a campaign to map the areas of London that require improvement for cycling. In a recent post I mentioned a similar bit of work being done by the University of NSW.

It is a fantastic tool that uses the power of the internet to get a whole lot of information relatively cheeply. Unfortunately it does not make the information available to the general public to see what hazards are being reported by others. They may have done that to avoid people copying other people's posts - they hope to get actual users instead of just web-surfers with time on their hands. 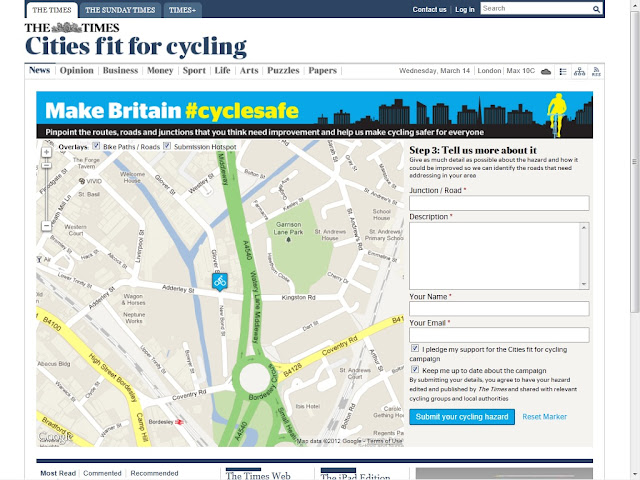 By getting all cyclists to become your auditors of safety it is possible to build up a system to prioritise issues in the network. The system will prioritise safety or maintenance issues that affect the most people. Unfortunately it may not prioritise issues that have the most risk due to the fact that most cyclists are risk-averse and will therefore not use routes that are very risky.
Posted by Athol Moore at Wednesday, March 14, 2012