Here is a nice little tool to compare the walkability of an address: www.walkscore.com
The tool uses a simple weighted scoring of distance to amenities such as shops, restaurants, schools, banking etc. to rank how walkable the address is. They have also produced a walkability Heat Map and ranked many US cities. 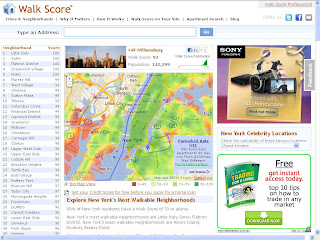 The tool is fun to play with but has some major limitations that makes comparing addresses not always that useful. Some of these shortfalls that may give strange results are:

Nice - I agree with the shortfalls, It would be nice to be able to easily contribute to the information automatically found; for example, no bike route... umm 'what about using the roads'?
But I was really impressed with one of the work route elements - the conversion to dollars of the time taken to make the journey by car. Apart from adding about ten minutes to my walk time (it takes me 25 not 35), and being at least 3 or 4 minutes light on the trip by car time (easily 11 not 7, especially at peak hour), the dollar value ready reckoner said $64/mth. So I really can afford my Thursdays at the Boundary Hotel!