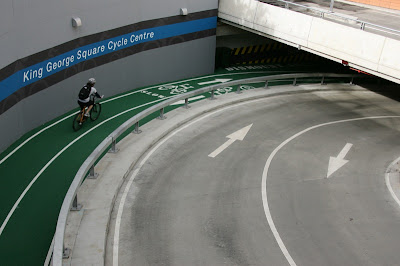 The Brisbane City Council has undertaken an assessment of the performance of the Cycle Centre located in the King George Square Bus Station. The assessment included a survey of current users of the facility. They have not published the report on-line but the Brisbane Times has a good article on it.

The Cycle Centre is owned by the Council but operated by Cycle2City. The photos are from their web site where they also have a video tour of the facility.

The main concern of the report is the slow growth in membership. At the time the research was done (June 2009) the centre was only at 50% capacity of the 420 spaces available. I popped in there a week ago to get stuff from the cycle workshop and they said they were around 75% full now. For the first week back after New Year I was impressed by how busy it was. 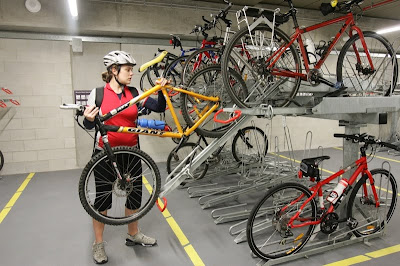 Some of the reasons cited for the slow growth in membership were
The Cycle Centre may have taken a bit of time to get going but I would hesitate to call it a white elephant (one of the comments on the news article). Although growth in membership may be slow there is further growth potential as the Roma Street precinct grows and improved cycle facilities are provided through the city. Within 5 years there will probably be a need for a second Cycle Centre in the city.

Brisbane's second Cycle Centre has now opened at the Royal Brisbane and Women's Hospital busway station serving a very different market. It will be interesting to see how it performs over the next 12 months.
Posted by Athol Moore at Sunday, January 10, 2010